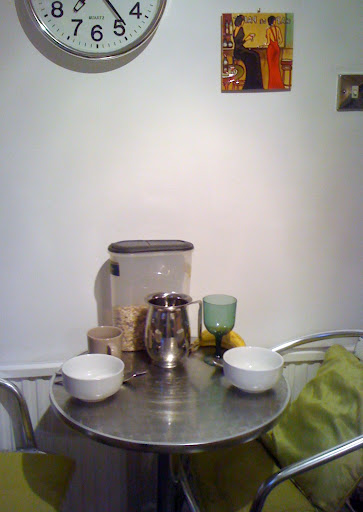 Denise stood in her kitchen and looked at the table.  She  well remembered the first time she excitedly  came into the kitchen through the door on the side.  33 years ago today. With her young husband and two young children.  Full of hope and anticipation. Her daughter, Sunshine was one and  her son,
Bloggerman was three.

It was not a big kitchen, but it seemed spacious after the tiny galley she had in her last house, plus they had been living in one room at her mothers house for eight months, while the house sale went through ….. AND you could fit a table and chairs into this kitchen.  Of course this was not the original table which had come with the house and had been a fold out job which allowed all of them to sit around.   This table was a trendy bistro cafe style.  Big enough for the two of them.. Now it was set for breakfast.

Denise loved her kitchen and spent a lot of time there.  It was always warm as the boiler was on the wall and you could see into the dining area and  lounge through a  serving hatch on the wall. ( Very 1960’s  and no longer fashionable, but the hatch was so useful.)  .She could keep an eye on the children and cook the meals in safety.   From the window over the sink Denise got the pleasure of seeing  next doors neat and colourful  front garden and she could watch the comings and goings  all the way up the street. 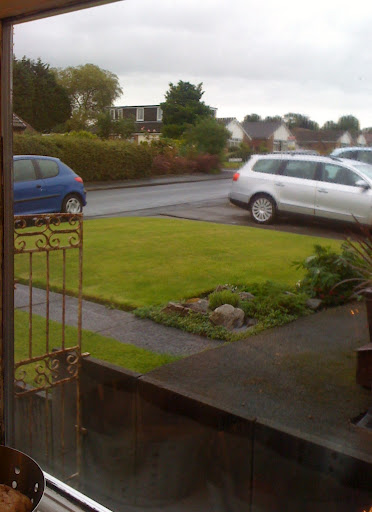 The detached bungalow seemed so posh  and spacious when they moved in.  Her husband earned a very good salary and they paid a good price.  A few years earlier she had gone for a walk around this area and seen these bungalows, with their quirky little windows along one side and thought to herself ” what kind of people live in these houses?” for to her at the time, living in such a posh house seemed far beyond her aspirations.  Now here she was moving in herself. SHE was the sort of person who lived here.
The original  kitchen units were sunshine yellow and glossy, very trendy, with pale grey worktops.    The colour was  not her choice, but they had been fitted by the previous owner and were very good quality.  Such good quality that it was to be 28 years before Denise got the fitted kitchen she wanted and for that 28 years she cleaned the cupboards nearly every day and then polished them, because they showed every fingerprint. and the worktops every tea stain.    Ironically that glossy finish on kitchen cupboards had become fashionable again, but she couldn’t wait to get rid of them. and chose a pale oak horizontal woodgrain that only needed an occasional wipe down and dark grey worktops that showed nothing. 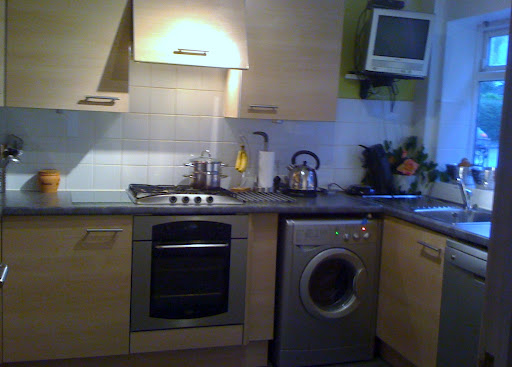 Looking at the table, Denise remembered scenes form her life in her head.  The children bursting through the door from school, starving as only children can be and sitting down to tea.  The four of them all sitting around the table for a meal, laughing and chattering about their day.  She always thought it was important to sit down as a family to share their day.
She remembered romantic evenings with her husband, cooking a nice meal of his favourite  steak and chips and always a bottle of wine.  She remembered brewing her own wine.  The demijohns lined in the warmth on top of the cupboards, pop, popping away as they fermented and the  gas escaped through the top.
She remembered fantastic birthday cakes she baked for the children and parties they had for her husbands large family, where everybody seemed to congregate in the kitchen near the food, which she took such a pride in cooking. Every year it became more and more elaborate. 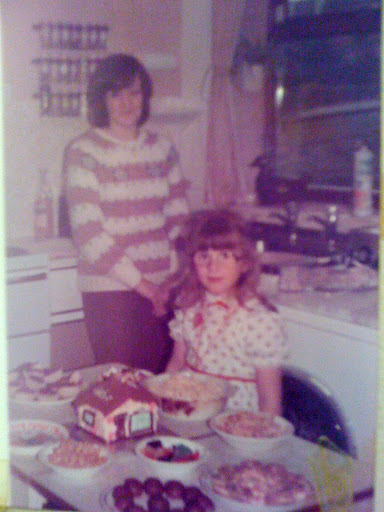 In their thirties they had both taken up running and she remembered sitting in the kitchen in her running gear, impatiently waiting for him to return from his run so he could stay with the children while she went for hers.
She saw her two best  friends sharing a lovely coffee and mince pie morning one Christmas.  Young  mothers like her, their sons lifetime friends.  The mums  had moved  to the lounge  for a glass of sherry and when they returned to the kitchen the boys had emptied six  boxes of  fine porridge oats all over the floor as ” pretend snow” and ruined the carpet!  but she couldn’t be cross it took them all their time not to laugh.  That was the last Christmas the freinds had together.   The following Christmas one of the friends had committed suicide and the other had a sick husband.
Denise remembered the lonely nights, sat with a bottle of wine after everyone else had gone to bed, feeling lonely and sad and not really knowing why after all she had everything she ever wanted so why was she so unhappy?
.
The she saw herself, now very ill, standing in front of the oven, completely unable to co-ordinate three pans on the top and thinking she would never get better.
After her husband left,  many nights  and mornings she would come home from work to her mum sitting at the table. Reading the paper. How she had taken her mum for granted.  Mum looked after the children while she worked and gave up a lot of her time and her life.  Now that Denise was a grandmother herself, she understood. Denise wished she could now tell her mum she understood, what a sacrifice it must have been  and how she loved her for it.now.
The image of her secret lover came into her mind. One of those  terrible,  painful, destructive relationships. When two people are not good for each other.   The one and only time he had come to her house, they were sat at the kitchen table and   Denise was telling him that they couldn’t carry on and at that moment her Aunt and Uncle passed by the window.  They had come to visit.

When her Mum had Alzhiemers, Denise  brought her to live with them and they would sit together in the kitchen chatting and laughing.  In her madness Mum would imagine all sorts of things.  Sometimes she was living as a guest in a hotel.  ( this is the best hotel I have ever been in!) and Denise would be the waitress.  Sometimes Mum would be the waitress and Denise was a guest.  Some days Mum would know who Denise was but often she thought Denise  was a nurse, visitor or the next door neighbour.  After Mum died, it was in the kitchen that Denise did most of her weeping.

Her present husband rarely spent time in the kitchen, he preferred the lounge,  except to eat his tea with her. but she remembered one tender moment when he held her hand and repeated the marriage vows to her over the table, because she wouldn’t marry him and he wanted to convince her of his commitment.
Eleven years later they returned from their honeymoon to the table and the floor piled high with wedding presents.  It was like a childhood Christmas had come again.
Denise sees Bloggerman and Sunshine sat with her at the table, who  occasionally come home to discuss a problem or share some good news.
These days Denise loves the solitude of the early mornings, when she gets up and eats her breakfast at the table alone , watches the morning TV and catches up with her favourite blogs on  the computer…all at the same time!  Breakfast is always the same.  Home made Muesli with lots of oats and no sugar, banana, soya milk and green tea. A vitamin and mineral supplement she takes with a second  drink which is  coffee from the Senseo machine.
Today, now,  as Denise looks over at the table, sitting there she sees Geezer, her six year old grandson, who has slept over.  he is eating his  cereal and chattering away.  Cbeebies is on the TV.  He is asking if the rain has stopped and they can go biking?
She smiles as a warm glow of love and happiness  spreads through her.
She looks out the window and it has stopped raining.
Love Denise
Comments are welcome.  Click on “add comment”  below and scroll up. for the comment box.
If that doesn’t work, go to the home page and subscribe  by clicking “followers” or “subscribe”from the pop out menu from the right hand margin and clicking “join this site” and use google, twitter or Yahoo, or another account you have to join and comment.
If you still have difficulty try sending an email to denisefbol@gmail.com

17 thoughts on “THE KITCHEN TABLE.”

I love to hear your thoughts on my blog. please leave a comment. Cancel reply

This site uses Akismet to reduce spam. Learn how your comment data is processed.

I love these blogs

denisefrombolton.com/,2011-2013. Unauthorized use and/or duplication of this material without express and written permission from this blog’s author and/or owner is strictly prohibited. Excerpts and links may be used, provided that full and clear credit is given to denisefrombolton with appropriate and specific direction to the original content.